Curcumin is also being studied for reducing the inflammation that accompanies other chronic diseases, including dementias and cognitive decline as well as heart disease and even type 2 diabetes and autoimmune disorders. 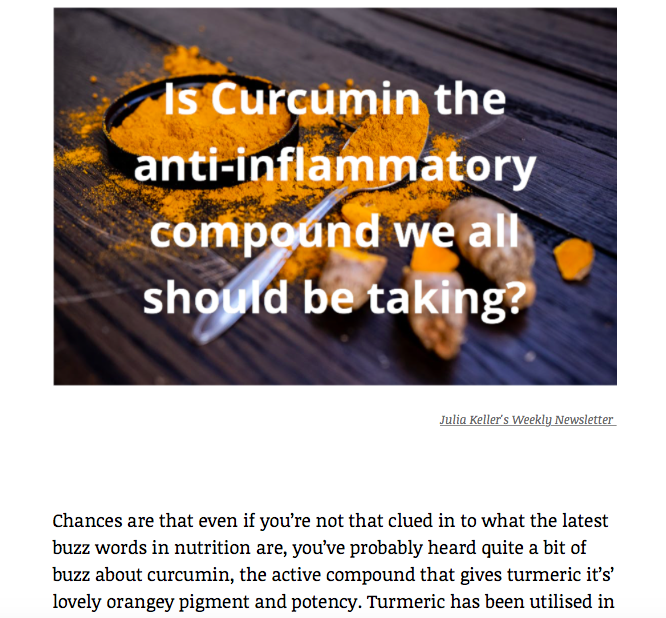 Chances are that even if you’re not that clued in to what the latest buzz words in nutrition are, you’ve probably heard quite a bit of buzz about curcumin, the active compound that gives turmeric it’s’ lovely orangey pigment and potency. Turmeric has been utilised in Ayurvedic medicine for its’ anti-inflammatory benefits for many decades and it has become synonymous with health over the last 5 years.

Many studies have linked curcumin with reducing inflammation of all kinds, including in chronic disorders and even reducing cancer tumours. In fact, it’s being studies alongside chemotherapy and has been shown to be more effective with chemo than chemotherapy alone.

Curcumin is also being studied for reducing the inflammation that accompanies other chronic diseases, including dementias and cognitive decline as well as heart disease and even type 2 diabetes and autoimmune disorders. It’s also recently been linked with anti-aging, as technically reducing inflammation also reduces the rapidity of the ageing process. It’s no wonder that the turmeric latte is being touted as your latest “health” drink.

Although turmeric (and curcumin), which is used in a vast degree in Indian cuisine, is in fact very helpful in reducing inflammation, it is not without its’ negatives. For one, the solubility and actual effectiveness of normal turmeric, as used in cooking or in that turmeric latte, is difficult to gauge. There is work being done on creating medicinal analogues with set pre-determined quantities to be used for inflammation reduction where solubility (how much of it you actually get into your body) and stability can be set, but this is still in testing mode despite curcumin being added to many supplements.

Curcumin supplements may also not be for everyone. For example, those on statins should exercise caution when taking curcumin as it theoretically can cause liver issues or keep the statins in the system longer than intended. Also, there is research with mice showing that curcumin could potentially cause lung cancer growth in those who smoke regularly. This is directly contradictory to research that showcases that curcumin reduces tumours from prostrate, breast, pancreatic and other cancers. But it still should be considered.

Want to know if curcumin is appropriate for your specific situation? Click here to book in a free call with Julia Keller, Nutritional Therapist, Naturopath and Clinical Hypnotherapist.