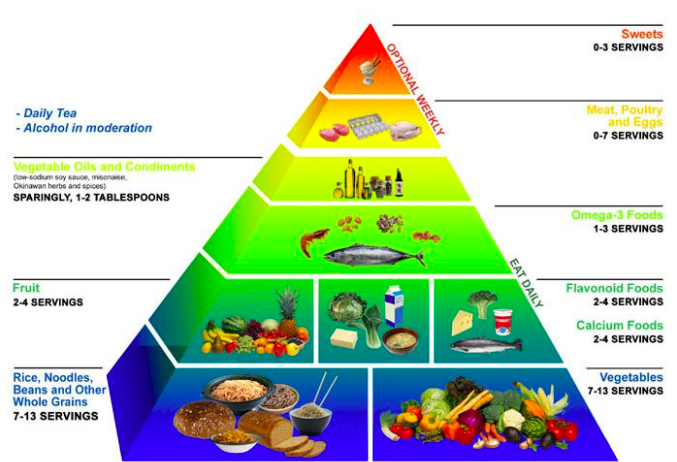 Having almost finished the second year of my 3 year Nutrition study, I’m starting to really understand why my clients are so confused about what to eat and what not to eat. Unfortunately, neither the media nor our communities nor even many well-meaning health prof 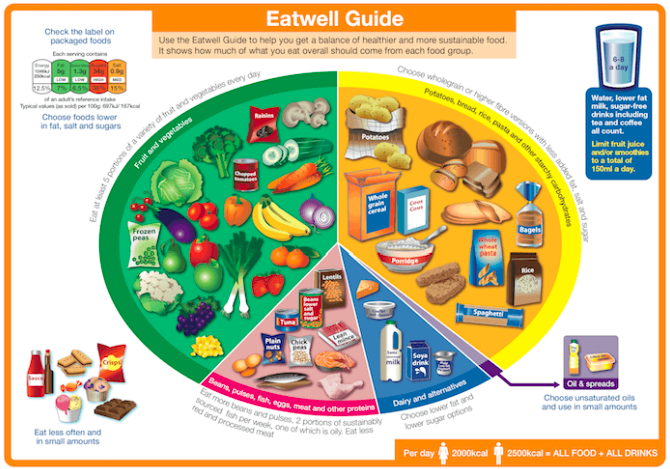 essionals make it any easier to grasp what exactly IS and IS NOT healthy.
Not long ago, the National Health Service in the UK dropped the traditional food pyramid in favour of the seemingly more easy to grasp Eatwell plate.

While the idea of making what we should actually eat much more clear was definitely a good one, and the intention was in the right place, unfortunately the EatWell plate leaves much too much open for misinterpretation. For example, fruits and vegetables are lumped in together and we are told to eat just 5 (or more) of the whole bunch of them. We are then told to eat a large bunch of starchy food and to drink anything up to 1.5 liters a day (tea and coffee count) and to have some dairy (or alternatives), some beans and pulses and some fish. And yes eating less red and processed meat is actually suggested (which is good), but an allowance is made for sweets and processed snacks (though it is suggested that we eat less of these.

So, if I happened to be a particularly unhealthy person who wanted to get away with a somewhat unhealthy diet (as many people who don’t know better do), I could use the guidance of the EatWell plate to help me fall into the comfortable zone of believing that I’m actually doing the right thing for my health. It wouldn’t even be too difficult. I could simply eat some cereal with milk for breakfast (dairy & starch categories); drink 2 cups of coffee with milk in the morning with a candy bar and a banana as a snack (dairy, fruit & veg & liquid categories with that limited candy bar included); a chicken salad sandwich with an apple for lunch (bread, protein and fruit and veg categories); another coffee and builders tea with milk with an orange and some roasted nuts as a snack (fruit & veg, liquid and protein categories); and some fish and chips with pickles and strawberries for desert for dinner along with a few cups of sparkling water (fruit & veg, protein, liquid and carbs categories). Technically, I’ve fulfilled the EatWell plate requirements. However, have I actually eaten well at all?

Well, technically, I’ve had absolutely no green leafy or cruciferous vegetables, I’ve mostly eaten unhealthy carbs (there are much healthier versions which I didn’t eat) and even my fish was buttered and deep fried, as were the chips. Almost all of my “5 a day” (which should actually be closer to 10 a day) were fulfilled through fruit, rather than vegetables. I would have also drank pretty much no healthy, cleansing filtered still water and would have instead dehydrated and overly stimulated myself with too many cups of caffeine and did a number on my hormone balance with a too high intake of milk.

Too be sure, there are some healthier alternatives to milk, such as almond, coconut, oat… milk but these aren’t even shown on the EatWell plate (though are referred to) and the fact that coffee (which actually dehydrates is supposedly counted towards the 1.5 liter liquid threshold is certainly not going to help with health!

So what’s a healthier alternative? Well, I like to take my clues from the populations that have basically outlived the traditional Western diet. The Mediterranean diet, for instance offers a more healthy and still manageable version to truly eat well. Though not a vegetarian myself, I must admit that those on a vegetarian diet definitely significantly outlast those on a typical Western diet. Meat, as it happens, is highly acid forming to the body. Vegetables and actual healthy grains, beans and lentils (and I mean grains like buckwheat and quinoa and not pasta and sugary cereal or store bought processed sliced bread) are good for the body and improve health rather than taking away from it. The macrobiotic diet too has won accolades for its’ longer life potential. But the diet that wins the number of most octogenarians is the Okinawa diet, which puts its’ emphasis on vegetables and whole grains (the good ones as mentioned above), followed by calcium and flavonoid rich foods and fruit and then by omega 3 foods with very little of meat and poultry also allowed (probably less than weekly even) and a minimum of sweets (sugar being definitely not great for us and unfortunately much too addictive).
The idea behind the diet isn’t simply that it helps us to live longer. Rather it makes sure that we live healthier for a longer period of time, meaning that we stay “younger” for longer. Now that sounds pretty good to me. What about you?

If you’d like help to get your diet and lifestyle under control to ensure healthier ageing, book a free 30 minute call with me here:
https://app.acuityscheduling.com/schedule.php?owner=12785109&appointmentType=1926282